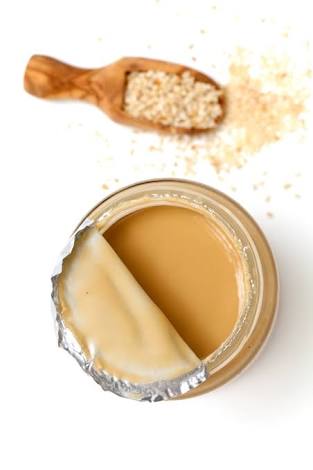 Tahini is made from toasted ground hulled sesame seeds; it’s exactly like peanut butter but made with sesame seeds instead. Tahini is used in Lebanese, Armenian, Greek, Cypriot, Iranian, Turkish, Iraqi, Levantine, and North African cuisines. Tahini is served as a dip on its own or as a major component of hummus, baba ghanoush, and halva.

Tahini is made from sesame seeds that are soaked in water and then crushed to separate the bran from the kernels. The crushed seeds are soaked in salt water, causing the bran to sink. The floating kernels are skimmed off the surface, toasted, and ground to produce an oily paste.

Sesame paste is an ingredient in some Chinese, Korean, and Japanese dishes; it is used in some versions of the Szechuan dish Dan dan noodles. Sesame paste is also used in Indian cuisine.

Tahini made from raw sesame seeds is lower in fat than tahini made from roasted seeds. Tahini’s relatively high levels of calcium and protein make it a useful addition to vegetarian and vegan diets, as well as to raw food diets when eaten in its unroasted form. Compared to peanut butter, tahini has higher levels of fiber and calcium and lower levels of sugar and saturated fats.[wikipedia]

Want some tahini? So here are some recipes to make tahini at home:

These are few mouth watering dishes where tahini is used as a ingredient:

Tejas Shah
Tejas is the Founder and Chief Food Blogger of KhaiPeeneJalsa. While people practice yoga as a stress-buster, Tejas takes to cooking. His craze for food is such that he can drive hundreds of miles for a delicious meal. For the most part, his world revolves around food.